This is a log of my experience installing Autoware on my bare metal laptop running Ubuntu 20.04. I had a ton of stumbling blocks but stuck with it and eventually got it working. I documented it along the way, so if you hit any of those same issues this might be useful to you.

As a warning, this blog post is pretty messy because of all those stumbling blocks, so you’re probably better off just following the official autoware installation docs and referring to this in case you run into the same problems.

I noticed that autoware recommended cuda version of 11.6, which only has official downloads for 20.04 and not 22.04, so that made me think that Ubuntu 20.04 was the better choice.

Here are the steps to upgrade to Ubuntu 20.04: official instructions.

I decided to go with the easier docker install until I had a need to use the source install.

Install docker engine based on these instructions. This links to the snapshot of the instructions that I used (as do below links). If you want to use the latest instructions, change the 0423b84ee8d763879bbbf910d249728410b16943 commit hash in the URL to main.

Install the nvidia container toolkit based on these instructions.

After this step I was able to run nvidia-smi within the container:

Rocker is an alternative to Docker compose used by Autoware.

Installed rocker based on these instructions.

After this step, running rocker shows the rocker help.

but got this error:

Using the approach suggested in this github post to add -e NVIDIA_DISABLE_REQUIRE=true, I ran the new command:

which seemed to work, as it dropped me into a container:

Based on the response from the super helpful folks at Autoware in this discussion I determined I needed to upgrade my Cuda version based on these instructions. (see later step below)

In the source instructions, it mentions that autoware depends on vcstool, which is a tool that makes it easy to manage code from multiple repos.

Setup workspace (from within container)

In the container shell (started above):

it took about 40 mins to build:

This tool is needed to download the map data.

In the container started above:

I think this error matters the most, since I get it if I try to launch rviz directly:

I will update my nvidia driver as alluded to above, remove the -e NVIDIA_DISABLE_REQUIRE=true workaround, and retry.

It failed on the last step:

Based on this advice, I’m going to re-install. First I am purging:

I still had some libnvidia packages, so I purged them with:

Since I’m running a system76 laptop, I went to them for support in order to upgrade the nvidia drivers.

This succeeded, but now nvidia-smi does not work:

I later realized that I diverged from the autoware instructions in two ways:

I simply rebooted, and now nvidia-smi works. Note that the cuda version went from 11.7 to 11.6. The strange thing is that previously I idn’t have the cuda packages installed.

I installed nvidia container toolkit based on these autoware instructions

And now it’s able to start a container and run nvidia-smi:

This error was caused by another divergence from the autoware instructions, where I didn’t run this step:

I re-ran all of these steps from the autoware docs:

and now this step worked:

Pin the libraries at those versions with:

This worked, but at first I was very confused that it actually worked.

It drops you back at the prompt with no meaningful output, but if you look closely, it’s a different prompt. The hostname changes from your actual hostname (apollo in my case), to this cryptic container name (0b1ce9ed54bd).

Note that if you run this in the container:

you will see meaningful output, whereas if you run that on your host, you will most likely see ros2: command not found, unless you had installed ros2 on your host previously.

But the same errors are showing up:

Note that these errors are also shown if I run rviz2 from within the container.

The recommended fix is:

I don’t currently have either of those libraries installed:

I installed these packages on the host (outside the container), but that didn’t fix the issue.

I tried installing the packages in the container, but that didn’t work either.

There is a discrepancy between glxinfo on the host vs container.

It is returning an error:

Whereas on the host:

This stack overflow post suggested a workaround, and according to the rocker docs

“For Intel integrated graphics support you will need to mount the /dev/dri directory as follows:”

After restarting a container with that flag, it no longer shows the libGL error: MESA-LOADER: failed to retrieve device information error.

I posted a question on the autoware forum to find out why this workaround was needed. Apparently there is another way to solve this problem by forcing the use of the nvidia gpu rather than the intel graphics card:

but I haven’t verified this yet.

And now it finally works!! Running rviz2 from within the container shows the rviz window: 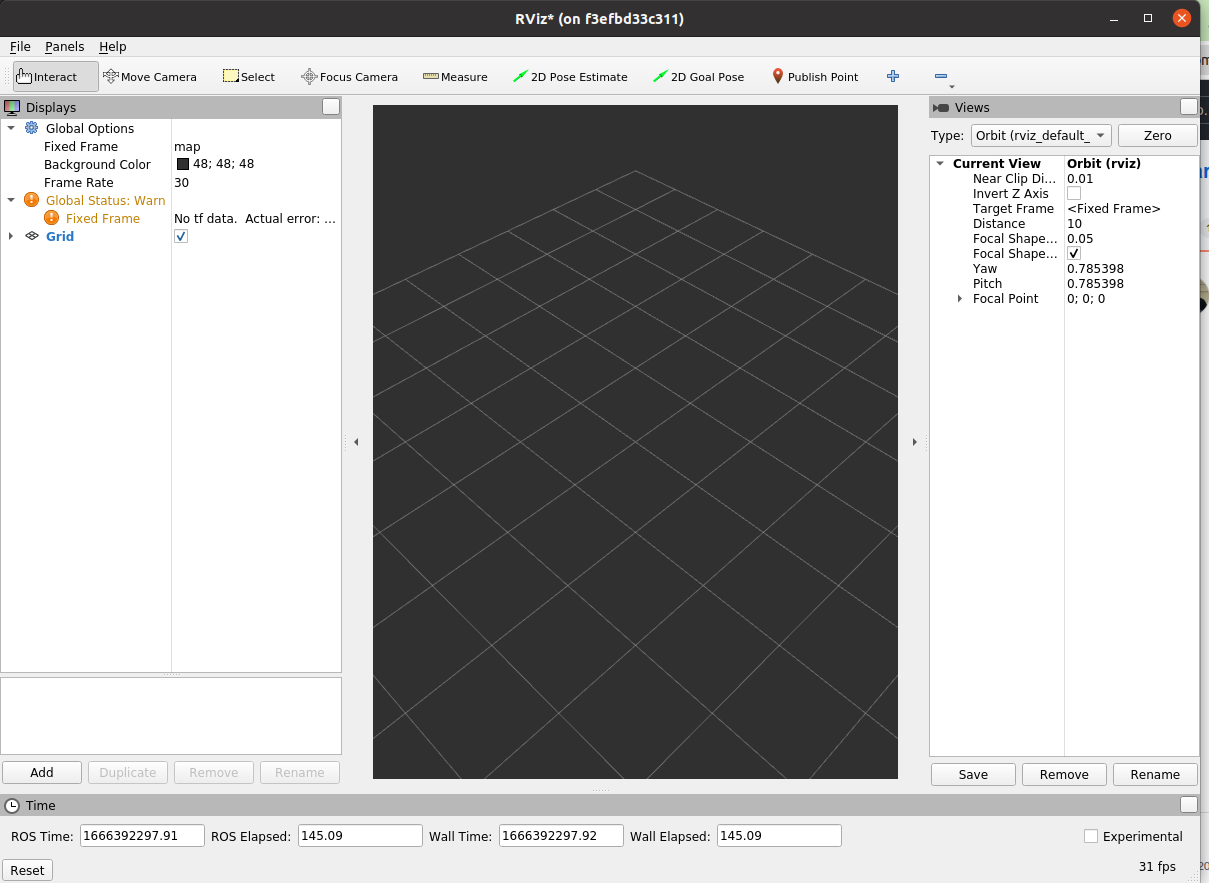 and rviz launched with autoware configured: 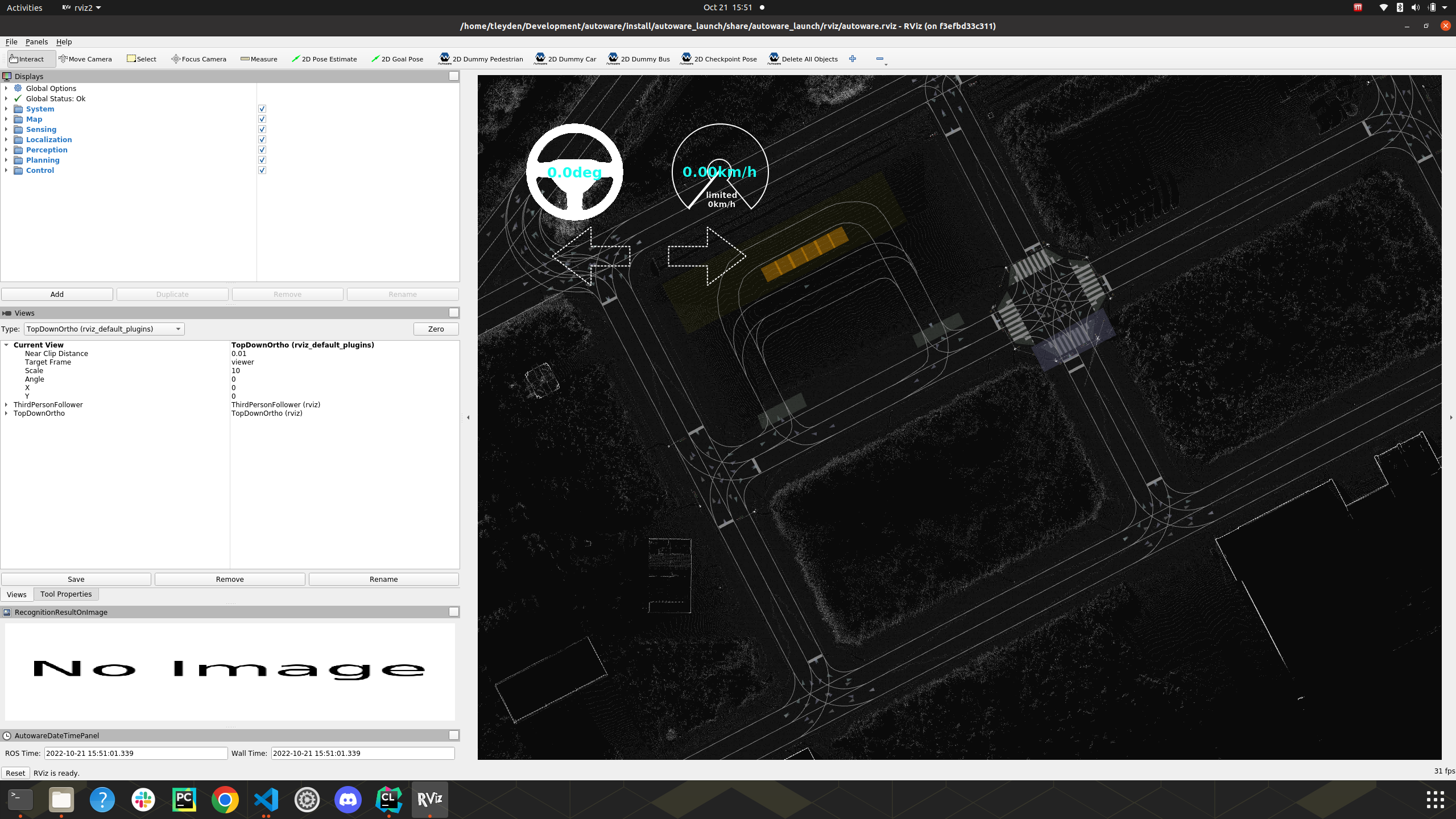 Phew! That was a lot harder than I thought it was going to be! It would have gone smoother if:

Unfortunately after these steps, rviz2 is still using the integrated cpu driver rather than the GPU.

See this follow-up post to see how to get it running on the GPU.

This is my old blog - check out my new blog for the latest!