This explains the steps to get a productive Emacs environment for Go programming on OSX, starting from scratch.

I recommend using the emacs from emacsformacosx.com.

It has a GUI installer so I won’t say much more about it.

After installing, you’ll want to define the following environment variables in your ~/.bash_profile.

To get the godoc tool as well as others, run:

Melpa is a package manager for Emacs, and is required for go-mode

To configure emacs for melpa:

Restart emacs and run M-x package-list-packages and you should see it contacting http://melpa.milkbox.net and you should also see lot of packages listed as being from the melpa archive.

Restart Emacs and open a .go file, you should see the mode as “Go” rather than “Fundamental”.

For a full description of what go-mode can do for you, see Dominik Honnef’s blog, but one really useful thing to be aware of is that you can quickly import packages via C-c C-a

I got this warning:

It’s really useful to be able to able to pull up 3rd party or standard library docs from within Emacs using the godoc tool.

Add the following to your ~/.emacs.d/init.el file so that it gets the PATH environment:

Automatically call gofmt on save

gofmt reformats code into the One True Go Style Coding Standard. You’ll want to call it every time you save a file.

Add these to your ~/.emacs.d/init.el:

After this step, whenever you save a Go file, it will automatically reformat the file with gofmt.

Godef is essential: it lets you quickly jump around the code, as you might be used to with a full featured IDE.

To verify that godef bindings work:

In order to add godef key bindings, add these to your ~/.emacs.d/init.el:

Now you can jump into code with M-. and jump back with M-*

Add the following to your ~/.emacs.d/init.el file:

Restart emacs, and if you open a .go file the mode should be Go AC (AC == AutoComplete)

Before further verifying, we need to install go-autocomplete in the next step.

The basic autocomplete installed is not as “go aware” as it should be. The go-autocomplete (aka nsf/gocode) package fixes that.

After installing go-autocomplete, open your ~/.emacs.d/init.el file and make sure the following was added:

If it was not added, you’ll need to add it yourself.

You’ll also need the following (as recommended in gocode issue 325):

Now restart emacs, and when you start typing the name of a field in a struct it will popup something that looks like this: 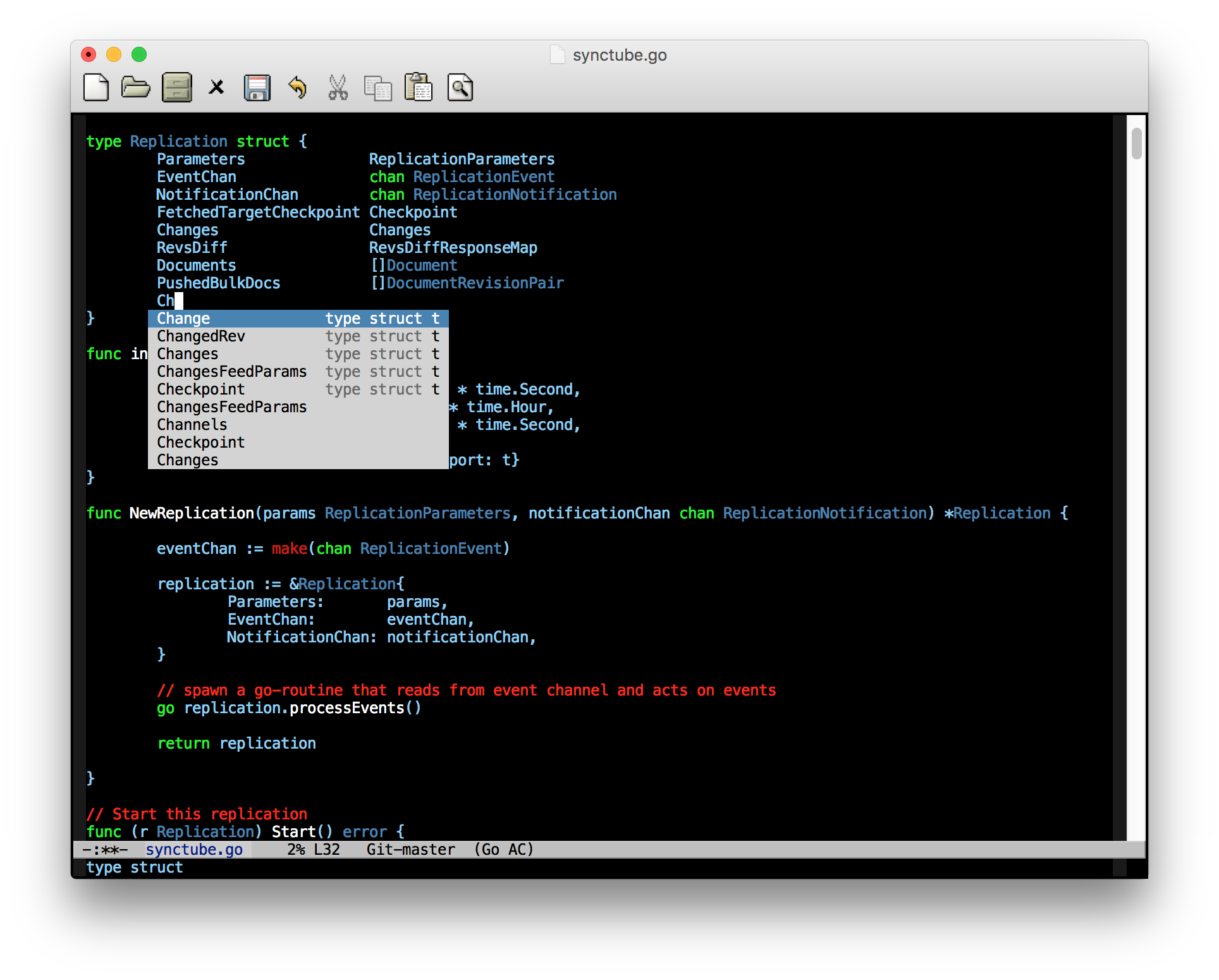 Note that is more “go-aware” than the default auto-complete functionality.

It’s convenient to be able to run M-x compile to compile and test your Go code from within emacs.

To do that, edit your ~/.emacs.d/init.el and replace your go-mode hook with:

After that, restart emacs, and when you type M-x compile, it should try to execute go build -v && go test -v && go vet instead of the default behavior. On some projects, you might also want to run go generate before go build

Power tip: you can jump straight to each compile error by running C-x `. Each time you do it, it will jump to the next error.