This will walk you through installing the Nvidia GPU kernel module and CUDA drivers on a docker container running inside of CoreOS. 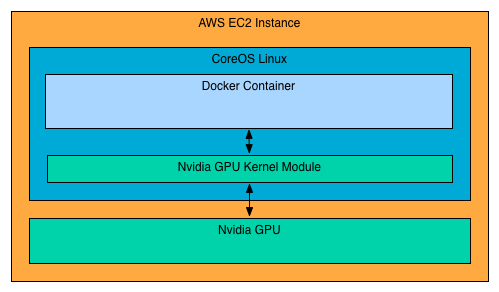 Find the public ip of the EC2 instance launched above, and ssh into it:

After the above command, you should be inside a root shell in your docker container. The rest of the steps will assume this.

In order to match the version of gcc that was used to build the CoreOS kernel. (gcc 4.7)

It should list gcc 4.7 with an asterisk next to it:

Now you should be ready to install the nvidia driver.

In order to avoid nvidia: version magic errors, the following hack is required:

I’ve posted to the CoreOS Group to ask why this hack is needed.

If everything worked, you should see:

No errors should be returned. Verify it’s loaded by running:

and you should see:

In order to fully verify that the kernel module is working correctly, install the CUDA drivers + library and run a device query.

You should see the following output:

Congratulations! You now have a docker container running under CoreOS that can access the GPU.

If you need other docker containers on this CoreOS instance to be able to access the GPU, you can do the following steps.

You should be back to your CoreOS shell.

When you launch other docker containers on the same CoreOS instance, to allow them to access the GPU device you will need to add the following arguments: